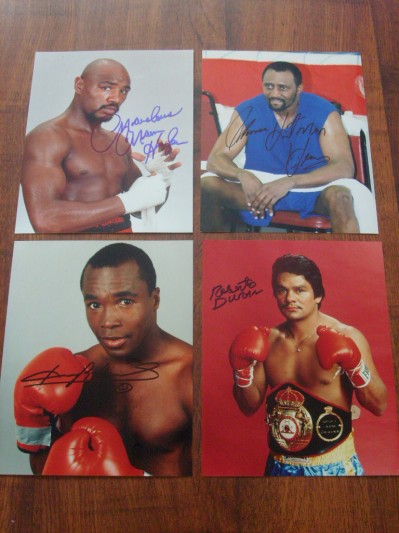 The FABULOUS FOUR "Marvelous" Marvin Hagler, Thomas Hearns, Sugar Ray Leonard & Roberto Duran who would fight one another nine times throughout the 1980's and win sixteen World titles between them SIGNED lot of (4) 8" x 10" photos.

"Marvelous" Marvin Hagler is a man who paid his dues. The rugged middleweight fought the toughest middleweights in the World for years before he was given the opportunity to fight for a World title.

Hagler frequently traveled to other fighter's hometown's for fights and some of his most memorable pre-title competition came in Philadelphia. There he met fighters like Bobby Watts, Willie "The Worm" Monroe, Cyclone Hart and Bennie Briscoe.

Hagler was finally given a title shot by champion Vito Antuofermo in 1979 but the two combatants fought to a draw.

He challenged for the title again one year later and this time he knocked out champion Alan Minter.

Hagler would make 12 successful title defences. Among his victims were Antuofermo, Mustafa Hamsho, Roberto Duran, Juan Roldan, John "The Beast" Mugabi, and Thomas Hearns. His thrilling three-round shootout with Hearns is regarded as one of the best fights of all-time.

Hagler's last fight was in 1987 when Sugar Ray Leonard came out of retirement and won an exciting, but controversial 12-round split decision for the WBC middleweight title. Hagler retired after Leonard would not give him a rematch.

He has scored many memorable knockouts in his career, and is widely considered as one of the greatest knockout artists of all time. Hearns was voted the greatest Super Welterweight of all time by Ring Magazine and received the "Fighter of the year" award in 1980 and 1984.

Thomas Hearns fought 21 current, past or future World champions in 22 World title fights. Blessed with exceptional height for a welterweight (6'1"), a broad back, and unusually long arms, Hearns had a unique build combined with destructive punching power. His promotional fight name was the Hit Man.

He is known best for his devastating right hand, his powerful left hook and for carrying his left hand low—a stance he used to lure foes into an exchange, as well as to maximize the speed and change the angle of his jab, a technique called the "flicker jab".

As a fighter, his aggression set him apart, controlling fights with his incredible reach, power and great boxing skills. He lost only one decision in his entire career, at the age of 35.

Professional Career
Hearns began his professional boxing career in Detroit, Michigan, under the tutelage of Emanuel Steward in 1977.

Hearns started his career by knocking out his first 17 opponents and quickly became one of the most feared and respected young boxers emerging in the late 1970s. In 1980 Hearns carried his 28-0 record into a World title match against Mexico's dreaded Pipino Cuevas. Having 12 title defences and hailed as the king of the welterweights Cuevas was a formidable opponent. Hearns ended Cuevas 4-year reign by knocking him out cold in 2 rounds. Hearns was voted "fighter of the year" by Ring Magazine in 1980.

In 1981 a dream match had been made, with a 32-0 record (30 KOs), he fought World Boxing Council champion Sugar Ray Leonard (30-1) to unify the World Welterweight Championship in a classic bout dubbed "The Showdown". In this legendary fight Hearns suffered his first professional defeat when Leonard stopped him in the 14th round. The stoppage by referee Davey Pearl remains controversial, as Hearns was ahead on all three scorecards and did not appear hurt. Hearns and Leonard banked a combined 17 million dollars for the fight making it the largest salary in sports history. 3 months after the fight Leonard retired due to a detached retina and there would be no rematch until 1989.

He won the WBC Super Welterweight World Title from boxing legend and 3-time World champion Wilfred Benitez (44-1-1) in New Orleans in December 1982 and defended that title against European champion Luigi Minchillo (42-1) (W 12), WBA World champion Roberto Duran (KO 2), no.1 contender Fred Hutchings (29-1) (KO 3), and no.1 contender Mark Medal (26-2) (TKO 8). During his reign at this weight, the 2nd round destruction of the legendary Roberto Duran, in which he became the first boxer to KO Duran, is seen as his pinnacle achievement earning him his second Ring Magazine's "fighter of the year" award in 1984.

During his time as Super Welterweight champion Hearns also ventured into the middleweight division, losing a legendary battle to World Champion Marvin Hagler in 1985. Billed "The Fight," (later known as The War), this superbout, hailed as the 3 greatest rounds in history, elevated both fighters to superstar status. Hearns broke his right hand in the first round of this fight and lost by TKO in round 3.

Hearns quickly made amends by dispatching undefeated rising star James "Black Gold" Schuler with a devastating first round knockout in 1986. Sadly, 2 weeks after the fight Schuler was killed in a motorcycle accident. Hearns presented the NABF Championship belt to Shulers family at his funeral saying he deserved to keep the belt as he had held it longer than Hearns.

Other notable World Title fights included his 7 knockdowns of 3-time World champion Dennis Andries to win the WBC Light Heavyweight World Title in March 1987, his four-round destruction of the feared Juan Roldan (63-2) later that year to claim the WBC Middleweight World Title, his TKO "Ring Magazine 1988 upset of the year" loss to Iran Barkley in his first defence of that same title and his win against James "the Heat" Kinchen (44-3) for the WBO Super Middleweight Title.

Hearns had to wait until 1989 for a rematch with Sugar Ray Leonard, this time for the WBC and WBO Super Middleweight titles. This was Hearns sixth Superfight, a fight which much of the public believed Hearns won, flooring Leonard in both the 3rd and 11th rounds. However, the judges scored the fight a controversial draw. Leonard later admitted that Hearns had beat him and that he was gifted the draw stating the fighters were "1-1 in his books".

1991 would see a last great performance of the ageing Hitman as he challenged the undefeated WBA Champion Virgil Hill for the light heavyweight crown. In Hill's 11th defence of the title Hearns would return to his amateur roots and outbox the champion to win a convincing decision and add a 6th World Title to his illustrious career.


Equipped with speed, ability and charisma, Sugar Ray Leonard, filled the boxing void left when Muhammad Ali retired in 1981. With the American public in search of a new boxing superstar, Leonard came along at precisely the right time.

Leonard was named Fighter of the Decade for the 1980s. And why not. He entered the decade a champion and left a champion. In between, he won an unprecedented five World titles in five weight classes and competed in some of the era's most memorable contests.

There were few things Leonard could not do once the bell rang. But what he did best was analyze his opponents and devise a strategy to overcome them. He found a way to beat stylists, sluggers and brawlers. And beneath that flashy surface was a competitor with the remorseless ability to put an opponent away when they were hurt. There were few better finishers in boxing.

Leonard surfaced in the public's imagination after winning a gold medal at the 1976 Olympics. He won the WBC welterweight title in 1979 after stopping fellow Hall-of-Famer Wilfred Benitez in a violent chess match that pitted two of the game's master technicians.

After one successful defense, Leonard faced legendary lightweight champion Roberto Duran in what may be the most anticipated non-heavyweight fight in history. In a fast-paced battle, Duran dethroned Leonard with a unanimous 15-round decision. Leonard regained the title when Duran quit in the eighth-round of their rematch.

In 1981, Leonard climbed the scale and knocked out junior middleweight champion Ayube Kalule. He then returned to the welterweight division for a unification showdown with WBA champ Thomas Hearns. Leonard and Hearns waged a memorable war but Leonard, behind on all three scorecards, managed to knock Hearns out in the 14th round.

After one more fight, Leonard, suffering from a detatched retina in his left eye, retired. He returned to the ring in 1984 and knocked out Kevin Howard only to retire again.

After nearly three years of inactivity, Leonard returned again and pulled off the Upset of the Decade when he outpointed Marvin Hagler to win the middleweight title in 1987. Leonard added titles four and five in November 1988 when he recovered from an early knockdown to stop power-punching Canadian Donny Lalonde. At stake that night was Lalonde's WBC light heavyweight title and the vacant WBC super middleweight title.

Leonard made two successful title defenses of the super middleweight title, fighting to a controversial draw with Hearns and decisioning Duran in their third and final encounter.

Leonard retired again, but could not stay away. At age 34, he challenged WBC super welterweight champion Terry Norris in 1991. He was dropped twice and lost by unanimous decision at Madison Square Garden.

The former five-division champion announced his retirment in the ring immediately after the Norris fight. But in March 1997, he launched another unsuccessful comeback, which ended via a fifth-round TKO to Hector Camacho. It was the first time Leonard had ever been stopped.

Duran next moved up in weight to battle for the welterweight title and captured the WBC belt with a 15 round unanimous decision over Sugar Ray Leonard in Montreal on June 20, 1980. Following a win over Pipino Cuevas, Duran captured the WBA junior middleweight title from Davey Moore (TKO 8) at Madison Square Garden on June 16, 1983. Also in 1983 he engaged Marvelous Marvin Hagler in a hard-fought 15 round bout for the middleweight title (L 15). “Hands of Stone” claimed the WBC middleweight belt with an exciting 12 round split decision over Iran (The Blade) Barkley on February 24, 1989.

A superstar the World over, Duran is known for his ferocious, relentless ring style. Following injuries sustained in a 2001 automobile accident, he retired from the ring with a 103-16 (70 KOs) record.

Duran is still very active in the sport of boxing, now serving as a promoter with DRL Promotions.